From Trieste to the Dolomites

This is a trip taken by Drive Europe follow them on Twitter @DriveEurope The route takes in some great roads and has stunning views. take a look 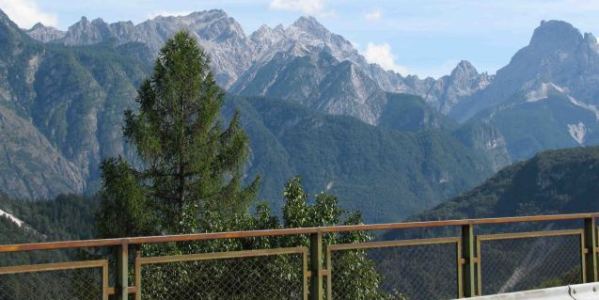 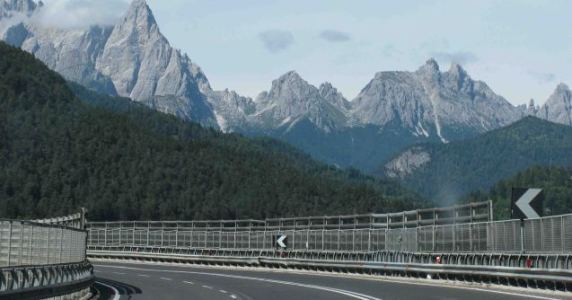 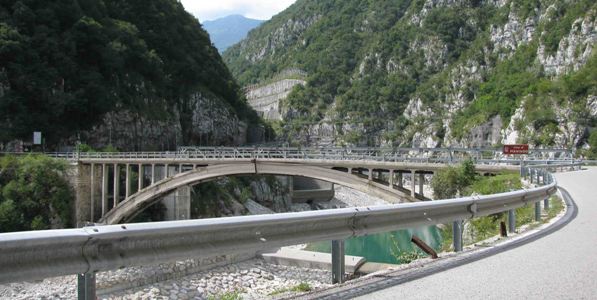 Leaving Trieste. There are two great ways in and out of the most north easterly of the Italian cities. The first is to zig zag up the mountains behind Trieste to the Slovenian border. The second is the northern coast road, past the fairy tale Castello Miramare through the classic To-Catch-a-Thief rock arches. The other way, south to the Slovenian border, ain't so hot.

First stop Palmanova. The citadel city, built from 1563 to defend against the Ottomans, in the shape of a nine pointed star, with four concentric rings of roads, designed as an ideal Renaissance city, is a must see in this part of the world. The problem was nobody wanted to live there. With its vaguely occulty overtones we're not surprised. After a quick whizz round the Piazza Grande, tyres slipping and screeching on the uneven Istrian stone paving, we get out of there as quickly as we can.

First sight of a Dolomite. From Palmanova we head north west on the back roads via Udine. It sticks in the memory because none of the filling stations sold maps. With mountains looming ever larger on the orizon though a map really isn't necessary.

We pass through a succession of villages built right on the road, Dignano, Spilimbergo and Sequals.
It's easy to imagine yourself a competitor in a legendary Italian road race like the Mille Miglia.
Actually finding a way into the mountains is more difficult than we thought- A map would have been handy after all. This road for instance looks promising until it veers away at the last moment. In desperation we fire up the satnav and head for Maniago, right on the edge of the mountains.

There is a shabby chic bridge just outside Maniago, on the SR251 shown in our pictures. Welcome to the Dolomites.

Is the pictured barrier getting some routine maintenance or are these repairs of the emergency variety? You'd surely have to be a nutter to cane it along here. There are a lot of barriers down.

There are some great Cloistered tunnels on Passo di Sant Osvaldo, still on SR251

Foot down in second gear, flat six screaming at 7,000rpm, intoxicating inside the tunnel and echoing around the valley outside. Judging by the looks on the faces of the locals, queuing at the tunnel entrance coming the other way, they've heard it all before. Sorry.

There is plenty of opportunities to study the local architecture on this route.

Longarone, at the T junction with SS51 Alemagna State Road, the main north south road between Venice and the Austrian border. Site of an embarrassing defeat for the Italian Army in 1917. A young Rommel captured over 1,500 men almost single handed. We turn north.
The Italians had their revenge at the Battle of the River Piave the next year. Galvanised by cries of â€˜Tutti eroi! O il Piave o tutti accoppati â€“ Everyone a hero! Either the Piave or we die!' the army held a line thought to be hopeless. The bridge now over the River Piave at Caralte is a staggering 604ft high. Notice the floral tribute and patch of new barrier on the right. This bridge is 604ft high.
Pieve di Cadore. Birthplace of the painter Titian. No paintings of his remain in his home town but there's a research centre/museum and the Palazzo della Magnifica Comunita has frescos by some of his contemporaries.

Monte Civetta, is a classic example of the local sawtooth skyline. Over 10,500ft, with 1,000ft cliffs, it's the fifth highest in the Dolomites, one of 26 mountain groups in total. Dolomite by the way is pale, carbonated limestone. The Dolomites are part of the Southern Limestone Alps. This is the eastern edge.
Why Cortina d'Ampezzo? Bond fans will know it from For Your Eyes Only, others from Pink Panther or Cliffhanger. It also staged the 1956 Winter Olympics. In the 1960s La Dolce Vita it was known as â€˜the living room of the stars', Audrey Hepburn, David Niven, Sofia Loren, etc. We figured it must be worth a look. Tourist info supplied us with a list of hotels so we spent the afternoon strolling round looking for somewhere to stay. More on that another time.

Tofane dominates the view west of Cortina. This is the third highest group in the Dolomites, topping out at 10,650ft.