Our St Moritz & Stelvio driving holiday is based in the beautiful Engadin region of South East Switzerland, possibly the most unspoiled and picturesque part of this already spectacular country. 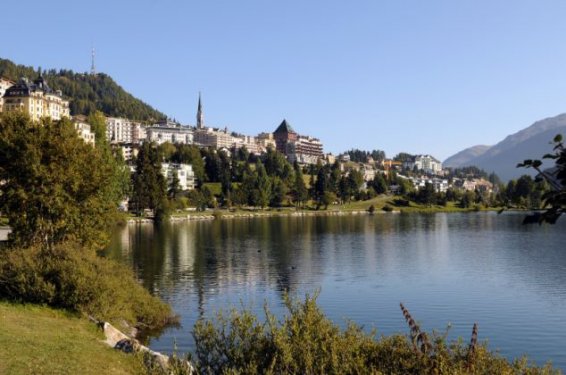 From a base in the alpine village of Pontresina, you will drive some of the most iconic passes in the Alps, including the Stelvio Pass, the Bernina Pass and the San Bernadino Pass. For this holiday you will be based in the 5 Star Kronenhof in Pontresina ‚Äì set in the heart of upper Engadin and the perfect base to explore the region from ‚Äì the hotel also boasts a world class spa and 1 star Michelin restaurant.
If you want to escape to the mountains, spend some nights in 5 star a luxury spa hotel, but at the same time get the opportunity to drive what are possibly the greatest roads anywhere in the Alps, then this break will be perfect for you.
St. Moritz & Stelvio Pass Driving Escape
Our St Moritz and Stelvio Driving & Spa Holiday takes you on a journey through the heart of the Swiss Alps and Italian Tyrol, and features drives across some of the greatest passes in the Alps, including the Stelvio Pass, the San Bernadino Pass and the Bernina Pass, combined with luxury 5 Star Spa accomodation in the Alps.
Day 1 ‚Äì Arrival
Transfer from Zurich airport to the Hotel. After check in, visit the Zurich town centre, take a walk along the world famous shopping throughfare that is Bahnhofstrasse, with its incredible collection of jewelry and designer stores. Continue to Lake Zurich, where you can stroll along the lakeside promenade. Drive Walk through √¢‚Ç¨‚Äú this evening we will be meet at the B2 Hotel for a complete walkthrough of your drives and itinerary for the next 4 days. This walkthrough will be given by your drive concierge in Switzerland.
Overnight Hotel: The 4 Star B2 Hotel & Spa, Zurich
Day 2 ‚Äì The Central Swiss Alps and Rhine Gorge Valley
Drive 1 √¢‚Ç¨‚Äú your car will be delivered directly to the hotel next morning. You then head south into the Alps, taking in two of the most spectacular passes, the Klausen Pass and Oberalp Pass. Stop for lunch in Andermatt, in the heart of the Alps, then take a run along the Rhine Gorge valley ‚Äì its narrow roads are literally carved into the rock faces on the sides of the valley and offer unbelievable views down to the Rhine below. Complete the journey to St Moritz by crossing the Albula Pass, tracing the path of the world famous Glacier Express railway, with its stunning viaducts along this most beautiful of mountain passes.
That evening we recommend you dine at the hotels 1 star Kronenstubli restaurant, it‚Äôs something very special indeed.
Drive time: 5 hours plus stops.‚Ä®Overnight Hotel: 5 Star Superior Kronenhof, Pontresina
Day 3 ‚Äì Stelvio Loop
Drive 2 √¢‚Ç¨‚Äú Today you will spend the day driving some of the most beautiful and scenic roads in the Engadin region of Switzerland, tracing a path along the unspoiled Lower Engadin Valley, stopping in several immaculately preserved villages, such as Tarasp with its Medieval castle. Now head south into Italy and the Parco dello Stelvio and towards the Stelvio Pass. You will take lunch in the park before heading up and over the spectacular Stelvio Pass, with its famous wall of 45 switchback turns √¢‚Ç¨‚Äú the pass itself climbs to 2750M. Return to Switzerland via the tight and twisty Umbrail pass, before heading through the Swiss National Park, over the Offenpass and back to your hotel.
Drive time: 4 hours plus stops‚Ä®Overnight Hotel: 5 Star Superior Kronenhof, Pontresina
Day 4 ‚Äì Return to Zurich via the Livigno
Your final tour back to Zurich takes you south from St Moritz and onto the beautiful Bernina pass, tracing the path of the Bernina Express railway past glaciers and rivers. You then head into the tax free resort of Livigno, on the tip of the Stelvio National Park, where you will take lunch. After lunch, head back into Switzerland, and your return drive takes you across two further mountain passes ‚Äì including the Fluela, before heading down into the jet set ski resort of Klosters for afternoon tea. Now head back to Zurich via the beautiful vineyards of the Maienfeld, where you get the chance to visit vineyards dating back to the Roman times. The final run back to Zurich then takes you via the shores of Lake Zurich, stopping for a sun down drink in the Seerose bar, before completing your drive back to the Widder hotel.
Drive time: 4 1/2 hours plus stops
Overnight Hotel: The 5 Star Superior Widder Hotel, Zurich
Day 5 ‚Äì Departure‚Ä®Spend the morning in Zurich, perhaps take a boat trip on the lake. Later transfer back to the airport.